View source
watch 02:56
Doctor Strange in The Multiverse o Madness - The Loop
Do you like this video?
Play Sound

The Forger Family is the family Agent "Twilight" was tasked to make for his mission.

The Family consists of:

Loid Forger: The adoptive father of Anya Forger, who works undercover as a psychiatrist working in Ostania, while he secretly works as a spy.

Yor Forger: The mother of the family that works as a civil servant at Berlint City Hall while also working for an unknown assassin organization by the code name "Thorn Princess".

Anya Forger: The adopted daughter of Loid Forger and Yor Forger, who doesn't know she isn't Loid's biological daughter. She was used as an experiment by the Ostanian government that gave her the ability to read minds. She ended up in an orphanage multiple times until eventually, she met Loid who adopted her.

Bond Forger: The pet of the family, much like Anya he too was used for experimentation by the Ostanian government and eventually found his way into the black market where he was sold to be a bomb dog. He would eventually meet Anya due to his precognition ability given to him from the experiments. 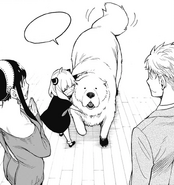 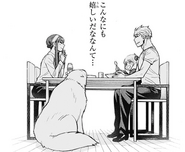 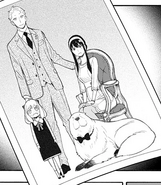 Family photo of the Forgers

Community content is available under CC-BY-SA unless otherwise noted.
Advertisement