Civil servant Yor Briar has a secret identity: an assassin named the Thorn Princess. Lately, single women had been suspected of being spies, which was making Yor nervous. Meanwhile, Loid was searching for someone to play Anya's mother so they could attend the interview at Eden College. He just happens to run into Yor at a boutique. Anya reads Yor's mind and finds out that she's an assassin and tries to get Loid to ask Yor to play her mother.[1]

Needing a wife for the interview, Twilight calls Franky and dresses him as a woman. However, he doesn't like the result. Franky complains stating that Twilight could have done a better job with the makeup, but Twilight explains this is the best he can do with the physique and height. Recalling the Operation Strix mission, Twilight has no choice but to look for a wife.

At Berlint City Hall, Camilla gossip that a thief may have entered the office, but it only searched the drawers with information about the girls. However, Millie finds the section chief to be way creepier as he always ogles her. Sharon states its due to the short skirts Millie wears, but Millie explains its because her boyfriend likes them. They see Yor making coffee for the section chief and suggest adding boogers, but Yor wonders if that will make the coffee taste better. Seeing how aloof she is, they comment the guys are probably staying away from her, but she has a nice body and face and if uses better clothes and make up, she will be quite attractive. Yor is fine with her job, but Camilla points out she is 27 and single. And with the increase spies, people have started reporting anything that is a bit suspicious, including a recent case where neighbors reported a single woman in her late twenties and she was taken for questioning. Camilla states she is having a party this weekend and invites Yor to come with a partner.

Later that night, Yor receives a call from her brother Yuri. How is worried about her, since she is a bit unusual and wonders if it isn't time for her to get married. Yuri explains there is a chance he will be promoted and will become even busier, but is worried leaving Yor alone. He suggests to introduce her to someone, however, Yor explains that won't be necessary as she is going to a party this weekend with her partner. Yuri is surprised she has a boyfriend, but is relieved. However, hearing its Camilla's party, Yuri explains he will be later asking Dominic about what type of guy is Yor dating and if he is some looser, Yuri will chase him away. As she hangs up, Yor starts to wonder on what to do and if Yuri finds she lied, he will lose even more trust in her. The phone rings again and Yor rushes to pick it up, and immediately tries to explain to Yuri that she was joking, however, its the Shopkeeper, who states he has a client for the "Thorn Princess" at Royal Hotel, Room 1307. Yor then heads to the hotel and on room 1307 floor, guards tell her the floor is reserved and she needs to leave. Yor states she heard there are traitorous scumbags staying there and takes out a blade and kills the guards. Entering the room, she explains she is there to kill Vice Minister Brennan from the auditing department and proceeds to kill everyone. Yor is an assassin with a code name Thorn Princess, who has been taught since young age and have been doing dirty works since then. As she washes the blood off, she sees she ruined her only good dress. Looking at the people she killed and recalling she needs a partner, Yor states the only homemaking skills she has are cleaning.

Franky gives Twilight copies of all files of unmarried women from the city hall. Finding a woman who doesn't care he is divorced with a kid, is refined enough for a prestigious school and willing to get married within 48 hours, will be a miracle. Meanwhile, Franky isn't picky, yet yet he himself can't even get a date. Anya wonders if a child is a problem, but Twilight assures her it isn't and tells her to go watch TV. Franky wonders why Twilight doesn't use a female agent from his work, but Twilight states he couldn't find a good match as a lot of them got caught in recent spy hunts. As they don't have enough agents, Twilight has another mission, where he needs to eliminate a certain smuggling ring. While they go over the files, Franky suggests the fastest way would be to find a woman with bad circumstances who will cooperate with him. However, Twilight wishes to avoid any risks. Franky then points out that Anya is risky herself as she doesn't look "rich". Agreeing with that, Twilight decides to buy Anya some new clothes.

Going to a tailor and while Anya is getting measured, Twilight recalls the files of some of the women there. Suddenly, Yor passes behind him without he noticing, bringing the dress she ruined and wanting it fixed. Twilight recalls her file, a single woman with both parents deceased and a younger brother, with both working as civil servants with clean records. Yor notices that Twilight have been staring at her and asks him why. Surprised she noticed his gaze, Twilight states he was admiring her beauty. Hearing he likes her appearance and needing a partner, Yor is about to ask him out, but Anya returns, stating she now knows how tall she is. Seeing, he has a child, Yor backs off, as she heard that women have been killed by wives for trying to steal their husbands. Reading her mind, Anya learn that Yor is an assassin and standing next to a spy, Anya gets super excited. Anya then reads Twilights mind that he was considering Yor for a wife and Yor's mind that she was considering Twilight for a partner at a party, but is backing off now. Anya then starts acting that she is lonely because she has no mother. Yor then wonders where is Twilight's wife and he explains she died two years ago. Learning that, Yor then decides to ask him to be her partner at a party. Explaining the situation with her brother and that she needs someone to pretend to be her boyfriend at the party, Twilight agrees. However, he then explains he needs someone to pretend to be his wife during an interview as wishes Anya to enter a good school, admiring that, Yor agrees too. The two then agree to meet again at the Saturday's party.

While shopping, Twilight receives instruction for his other mission in a fake coin change from the cashier. Deciphering it, he learns he needs to retrieve stolen art pieces and eliminate the smuggling ring, and he must carry the mission at 18PM on Saturday, when the target meets the buyer. On Saturday, he decides to take Franky with him to finish faster the mission and be able to attend the party. Franky is against it, because he isn't good at fighting and Twilight had capped his tab, however, Twilight states that there are 78 pieces of art that are worth couple of millions and no one would notice if one or two go missing. Hearing that, Franky gets motivated for the mission. They manage to retrieve the items, but face large numbers of enemies, however, Twilight manages to handle them. As back up comes, they get into the van and run. While Franky wonders which item will go missing, Twilight sees a diamond ring and decides to take it, but while Franky argues that its an expensive item, the reinforcements catch up to them and causes them to crash.

Meanwhile, Yor have been waiting for Loid, however, as he didn't come, he to keep her relationship with her coworkers, she decides to attend the party alone. There Yor apologizes for being late and that her partner wasn't able to come. The women then gossip that they were sure her boyfriend didn't exist. Dominic is sorry that he couldn't meet Yor's boyfriend. Yor asks him if he can tell her brother she was with a kind gentleman, however, Camilla disagrees and states she will make sure that Yuri will learn that she came alone. Yor then sits alone, looking at the crowd and guessing that this is what "normal" is. The women gossip that she had the nerve to come alone and is still there. Hearing that, Yor decides to leave, but in that moment Twilight comes. As he bleeds, he apologizes for being late and introduces himself as Loid Forger, Yor's husband, mixing his and her mission. Loid explains that he is a psychiatrist and one of his patients had a violent episode. Camilla is surprised to hear that Yor is married and wonders why she haven't said so. Loid explains its was probably hard to bring it up, as its his second marriage and he has a child from the first marriage. Camilla gets angry, not wanting to believe that Yor has a handsome husband. Wanting to embarrass her, Camilla takes the hot gratin and acts that she trips and throws it at Yor. However, Yor manages to capture the plate with her feet. Loid admires her dedication to not waste food, but points out she must not use her feet to capture the plate. Camilla then tries to tell Loid that Yor did some questionable work before working at the city hall, where she was called into hotel rooms to give "massages". As that was a cover up for her assassinations, she attempts to explain it to Loid, but he interrupts her stating it was wonderful. Loid then explains Yor lost her parents at young age and did everything to care for her younger brother, and having to sacrifice yourself for someone else, requires an incredible amount of dedication.

Loid and Yor then leave and Loid apologizes for saying he was her husband. The van gets attacked by some of the remaining reinforcements, which causes Loid to wonder if there was a tracking device in the art pieces. He explains that some of his patients still haven't recovered from the psychotic episodes and they need to run. They leave the van and then Loid manages to knock out two men, explaining that he is using concussive recovery method. Two more men attack Loid and he manages to knock the first, but as the second was about to hit him, Yor knocks him out. She apologizes for helping with the recovery and that she is a self-defense expert. They continue to run and defeat more men. As they run, Yor suggests they should get married, which shocks Loid. Yor explains that she is considered suspicious for being single and they can remain together for both of their sakes. Loid agrees and wishes they to go to the city hall right away. He realizes his pocket has a hole and had lost the ring. As more men appear and they hide behind cover, Loid takes a grenade and pulls the ring and throws it at the men. At the same time, he uses the grenade ring to propose to Yor and she agrees. 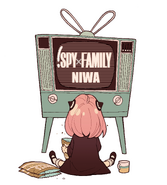